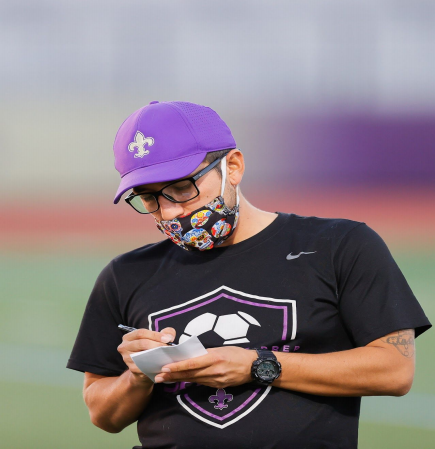 Mike Navarro, A dedicated young man from a tough background with a passion for the game of soccer.

Navarro is the current Notre Dame Prep varsity boys soccer coach and is an inspiration to many at NDP for rebuilding its soccer program. Mike Navarro has been at NDP for 3 years now leading the boys’ soccer team to two region titles.

Navarro originally born in Mexico fell in love with the game of soccer. He played for numerous academies across Mexico before he moved to the U.S with his family at the age of

16. Navarro said, “soccer kept me going through all the tough times growing up and kept me motivated to be the best person I can be,” said Navarro.

Mike after moving to the U.S struggled in school and academics and used soccer as his getaway. Although he played for a local soccer club in San Diego he still wasn’t enjoying California as a whole and his move there.

Mike later found a new passion in coaching as he ran some camps over summer with his buddies. Mike said, “that summer I found joy and passion for coaching”. After Mike graduated highschool he instantly coached for a youth club in San Diego called “Surf”, said  Navarro.

A few years later, Mike moved to Phoenix Arizona and worked a 9-5 sales job before he began coaching for Scottsdale Blackhawks. After a few years, he settled down and took on another job of coaching NDPs boys varsity soccer whose predecessor was Coach Kenny.

Mike loved coaching high school soccer and the comedy out of the kids he coached. Coach Mike’s first year at NDP brought the team to a region title and ended the four-year playoff drought. Mike went on to win region coach of the year. Andrew Vines Boys varsity soccer player said “that year I was a freshman and had doubts moving into the season with a new coach. But, as a team, we really bonded with him and started playing as a whole by passing, shooting, and doing set pieces well through his drills and coaching”, said Vines.

Mike Navarro continued to coach for NDP and won another region title last year. Navarro said, “I believe with my coaching experience and the teams’ recent success we could bring home a title this year. The boys’ varsity soccer program has a great group of kids this year with hard work and dedication being shown every day at practice we definitely have a chance at state”, said  Navarro.

Liam McSherry, an NDP senior on the Boys Varsity soccer team said, “Coach Mike is a great coach and I’ve had him for the past 3 years now. He really rebuilt this program through hard work and bonding. Although he can be hard on us sometimes he really means well and pushes us to be our best”, said McSherry.

Mike Navarro continues to coach at NDP and will for as long as he can. He loves the boys there and their work ethic. He has come a long way to be where he is now and loves what he does

Six movies you need to watch before you graduate

ABOUT US
NDP Live encompasses the latest technology trends to cover digital video, journalism, and photography. The club works together to bring all talents into one team to promote NDP and broaden the scope of students' work.
Contact us: live@ndpsaints.org
FOLLOW US
© 2019 NDP Live. All rights reserved.
MORE STORIES

The Top 10 Classes to Take at NDP According to Upperclassman

Top 10 Things to Know Before Finals